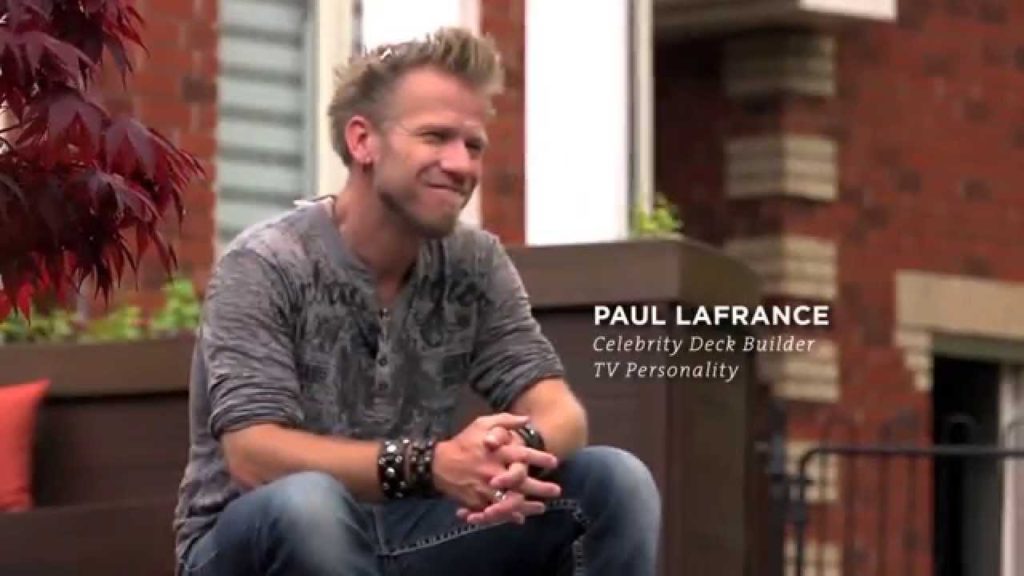 Re-Thinking the Deck with Paul Lafrance

I love old western movies. Particularly anything involving my man Clint Eastwood. But whether you are a fellow fan of that genre or not, most people can easily visualize the scene of a dusty gunslinger exiting a dilapidated saloon through a set of creaky swinging doors, with the camera panning down to his spurred boots, as he steps out onto the buildings wooden porch…right?

Take that structure and place it in somebody’s backyard, maybe turn the deck boards 90 degrees, and you have most peoples initial visual of what a deck would look like. A square wooden structure that allows you to step into the open air, without getting your boots dirty, spurs or no spurs. Throw in a BBQ and some plastic furniture and Voila!! It’s no wonder I have heard these words spoken by countless homeowners over the years…”Paul, it’s just a deck.”

So what is this mental block towards creative deck building that has been so prevalent in the minds of the general population for so long? I personally don’t think it is more complicated than the fact that boring wooden box decks are just what people are used to seeing! Think about it? If you are to drive by a new subdivision, you are often met with the sight of a sea of “builder decks” stretching out toward the horizon. They are called builder decks for a reason. If the builder is required to put a deck on his new home, he builds one as cheaply and quickly as possible. So the general population sees thousands of new houses, with thousands of cheap builder decks. It’s mind programming!

Hence my determination over the last 20 years to redefine “the deck” to what it should be.

So what should it be? The deck “should” be a true extension of the home that carries your living space from the indoors to the outdoors. Would you settle for a living room that is built as cheaply and quickly as possible with no aesthetically pleasing elements whatsoever? Of course not. We want our interior living spaces to make us feel good when we spend time in them. So why would we settle for anything less from an outdoor living space?

What many overlook is the fact that an outdoor living space that is created with the same level of creativity we put into the inside of our homes offers something the inside of our homes do not…the benefits of being outdoors! There is something inherently peaceful about being out in nature, even if you live in an area where the only thing you can see from your backyard is the sky. We live in the fastest moving culture in the history of humanity. There has never been a greater need to have a true place of rest, in a time when vacation travel can be a nightmare, and a secondary vacation home is an impracticality for most. Hence the reason why the backyard revolution has begun…and why I’m now designing for people even outside of North America. It would seem the need for a place of rest is a universal thing.

One story further solidifies the sad existence of one of the most untapped areas of construction in the modern home. I visited a client years back in one of the most luxurious neighborhoods in Toronto. The house was breathtaking right from the moment you walked in the front entrance. It had mirrored curved staircases leading to a second floor mezzanine so grand that you half expected a world leader to approach the railing to address his people. The gorgeous wrought iron railing alone had a $50K price tag. The rest of the home was absolutely state of the art. A computer ran the house and would turn lights on and off as you ventured between rooms. I half expected the kitchen refrigerator to ask me about my inner feelings. Everything worked seamlessly, right up to the moment I looked into the backyard. “Ahhhhh…I see why I’m here” I said to my client as I grimaced at the sight of the 20’x20’ pressure treated monstrosity with ugly 2×2 picket railing. “We definitely need to make your outdoor living space match the inside of your home” I continued. My client looked at me puzzled. “All I want you to do is replace the old boards” He said. “IT’S JUST A DECK.”

I knew I had my work cut out for me.

After a few hours I showed him a concept for his backyard space that had him very excited. He admitted that he must have been “programmed” to view that space as simply utilitarian at best based on what he had seen in most backyards. I was happy to give him a much different perspective. The deck I built there was just a part of an overall transformation of the entire backyard space that included stonework and greenery that drew you out of the house into a wonderfully welcoming outdoor relaxation zone. The deck changed from an elevated platform surrounded by prison-type railings that actually made you feel separated from the yard, to a structure that seamlessly blended the interior elements of the home with the outdoor features. There was also now a flowing transition between the natural outdoor elements of the yard, through to the door of the house.

The impact of the transformation on my client and his family was immediate. Some members of the family had only ventured into their backyard once or twice after years of living there. Now they were discussing why they would need to travel to a resort when their backyard was offering the same vacation appeal. The deck now had individual “rooms” that were just as inviting as any interior room of their home, and it cascaded in tiers with gorgeous glass railings that opened up the view throughout. In short…they simply didn’t consider that what they now had in their yard was possible.

All it took was the same level of creativity that went into the inside of their home. That’s all!

What was even more puzzling to my client was the fact that the new deck was the exact same square footage as the old boring box they had originally! What can I say…I love my job.

So, sorry Clint. As cool as you are, every time I see you step out onto an old saloon porch, I’m glad some things are changing…even if you are timeless.